Celebrating a centenary is not something that happens every day, so it is being properly prepared with great care. Zagato’s one hundred years are up and a special action was announced last year by Aston Martin, the manufacturer who has accompanied the bodybuilder for more than half of his life. The result would be the Aston Martin DBZ Centenary Collection, a lot consisting of two very exclusive vehicles that would by no means be sold separately.

Only 19 packages will be made that included a classic and a modern vehicle, a clear tribute to the history of both Zagato and Aston Martin. The classic chosen is the Aston Martin DB4 GT Zagato, a continuation of the model made reliably and entirely by hand. The modern one is the Aston Martin DBS GT Zagato, a reinterpretation of the new DBS Superleggera. The price of this pack is 6 million pounds without taxes (6.73 million euros). Now they have finally been shown together and in person, so we will analyze both.

The original Aston Martin DB4 GT Zagato dates from the 60s. Only 19 units were made (hence the number of copies of the DBZ Centenary Collection) that stood out for being lighter and more powerful, with a behavior that made it stand out in competition. And although almost six decades have passed since then, these specimens are going to be manufactured in an artisanal way like the original ones, although also applying some modern techniques.

To complete each of them, some 4,500 hours of work will be necessary. Keep in mind that the aluminum body panels are molded by hand and that everything has been taken care of in detail. The engine will remain a 4.7-liter inline six-cylinder associated with a four-speed manual gearbox. These copies will be delivered to their buyers later this year 2019.

The Aston Martin DBS GT Zagato is the modern copy of the collection, a derivative of the DBS Superleggera with the characteristic signature of the bodybuilder. That translates into a completely new design, with a front that highlights that active grill consisting of 108 pieces of carbon fiber that take the shape of a diamond. Nor could the legendary double bubble roof, present in virtually all Zagato creations, be missing. 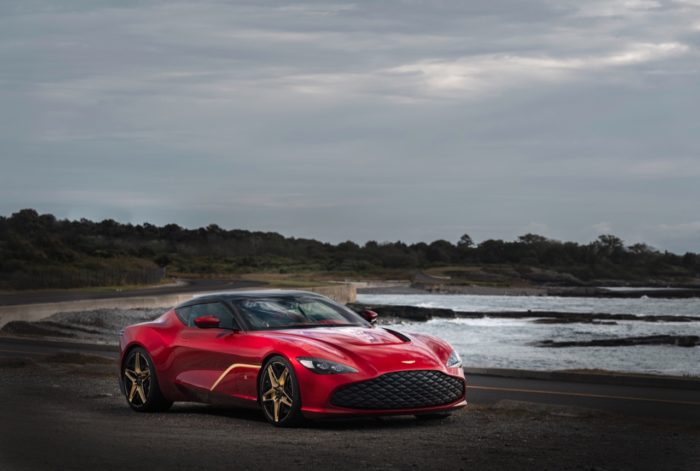 The 21-inch wheels are finished with 18-carat gold, a material that is also present in other parts of this vehicle. In addition, 3D printing has made it possible to make fully customized pieces, which can be selected through the program ‘Q by Aston Martin’. The engine of this DBS GT Zagato is the same V12 bi-turbo of 5.2 liters, although its power has risen to 760 HP and will have improved performance.