Recently was held the closed premiere of the new Audi A5 coupe of the second generation. On the same day also was presented the sports version of S5.

In fact the exterior of car is similar to the last A4. The car has received new engines and other all-wheel drive system in the high-end versions.

Public premiere of the new Audi A5 is scheduled for October, which will be held in Paris at the motor show. The first sales of both cars Audi A5 and S5 will start in autumn 2016.

Besides, the design of Audi A5 was developed by all the same Marc Lichte.

Despite numerous improvements of the car its appearance is not much different from its predecessor.

The main differences are still there of course, and they are visible enough.

The first are: the matrix head optics, grille with sharp edges and lanterns, the lights are very similar to A4.

The factor windshield of coupe resistance has decreased to 0.25 – the best figure in the classroom. Meet the New Audi R8. It might be a Tesla Rival in the Future?

Technically the car got a lot of changes. A5 was built on a platform MLB. The main advantage of this platform is that it is made mostly of light metals and alloys. In addition, the new product is lighter by 60 kg.

A5 offers a choice of 5 engines – namely two supercharged TFSI gasoline engine and three turbo-diesel TDI. In the base case of 1.8-liter gasoline engine (177 hp) replaced the 2.0-liter with 190 horsepower impact. The same unit is provided in another boosting of return to 252 horsepower.  There are also turbo diesel 2.0-liter and 3.0 liter, the most powerful of which produces 286 hp.

The car accelerates from zero to 100 km / h in 4.7 seconds – this figure is higher at 0.2 sec. than before. Maximum speed is electronically limited to 250 km per hour.

Transmissions for the A5 provides only two: a six-speed “mechanics” and seven-band “robot» S-tronic. You can also buy a coupe with front-wheel and all-wheel drive. All-wheel drive novelty has changed and surprised.

First of all it is called Quattro Ultra, and it is based on multi-plate clutch with electronic control, not the mechanical differential Torsen, which the Bavarians began to use on all models up to 2016.

Additionally, can be ordered suspension with electronically controllable shock absorbers and dynamic steering system, when the gear ratio varies depending on the speed and steering angle. Independence of New Audi Q2 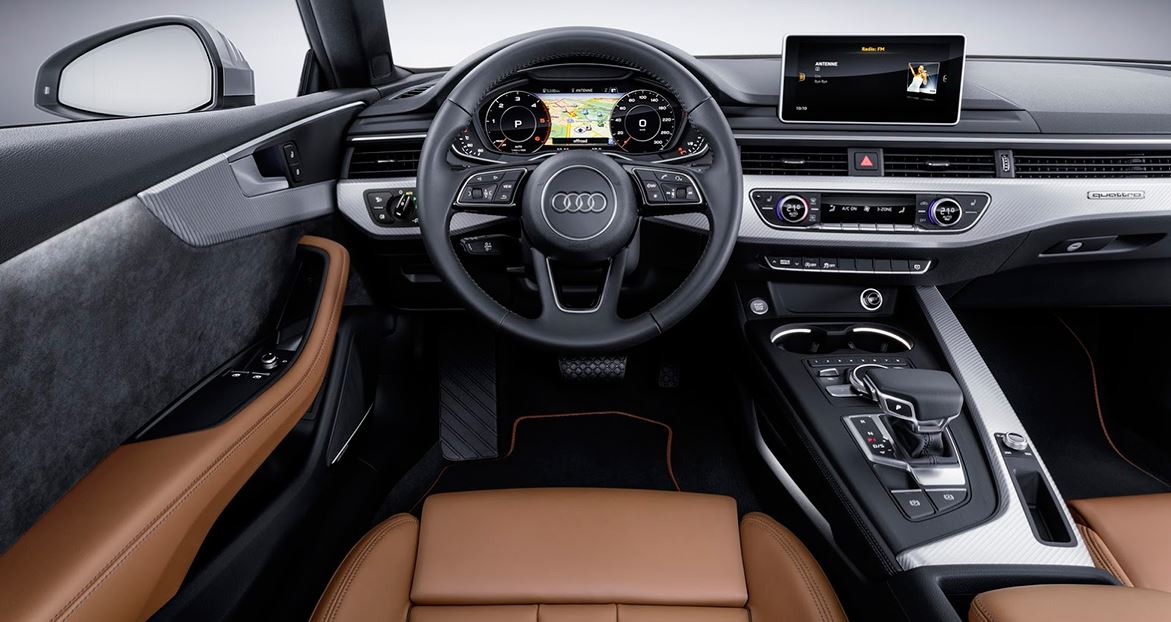 Inside the car, in the basic version is a perfectly ordinary dashboard. But as an option you can order a digital dashboard, like the Audi TT.

There is also MMI multimedia system: it can help to adjust the volume or change the navigation map scale using certain commands. Since this system now understands gestures. Mercedes GLC, BMW X3 and Audi Q5: Which Crossover to Select?

For a fee you can also get the security package Audi Connect Safety & Service. This safety system opens and closes the locks using a smartphone on your iOS or Android.

As well for a fee you will be offered a wireless charger, adaptive cruise control and autopilot for traffic jams. As standard you will get xenon optics, LED lights, multimedia system with seven-inch screen, Bluetooth and climate control.