Now that electrification is here to stay, we are seeing a boom in the supply of plug-in hybrid models, a solution that is quite logical. These vehicles have a combustion engine added to another electric and a battery, gasoline being the main block in most cases. However, some diesel plug-in hybrids also appear to offer a different alternative. Although this technology may seem novel, there is a history that dates back more than two decades ago: the Audi Duo.

It was in 1989 when the four-ring brand would begin its hybrid journey with the presentation of the first Audi Duo at the Frankfurt Motor Show. The familiar Audi 100 Avant (C3) was used with the 2.3-cylinder petrol engine 2.3 and 136 hp. It added a small electric motor of 12 CV and a nickel-cadmium battery (Ni-Cd). From that first Audi Duo, only ten copies were made to test and improve the technology. 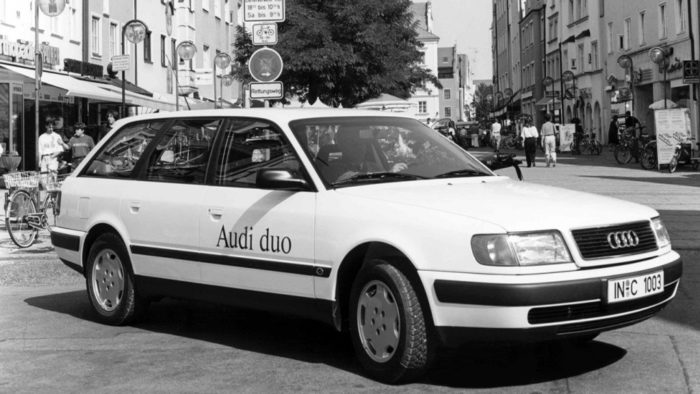 Thus, in 1991 a second prototype would arrive with notable advances. In this case, the five cylinders were exchanged for a four-cylinder block of 2.0 liters and 116 hp. The electric motor reached 29 hp and the traction was different. While the previous one was forward, in this one the quattro traction was chosen. It achieved an electrical autonomy of about 80 kilometers (the maximum speed in electric was 65 km / h) and the charge took around eight hours, as you can see, figures that have nothing to envy to the current ones.

But the plug-in hybrids project was a bit out of the way in Audi and there were no improvements in the following years. It was in 1997 when the third Audi Duo would arrive, which was a radical change from what had been previously worked on. In this case, a new base was chosen, the first-generation Audi A4 Avant (B5). Another combustion engine was also used, the 1.9 TDI four-cylinder diesel with 90 hp.

A 29 hp electric motor was installed, although in this case all the power went to the front axle. It announced an electrical autonomy of around 50 kilometers, with the speed limited to 80 km / h in this mode. The truth is that Audi believed that the idea had potential and led to production with the intention of selling about 500 units, mainly to fleets of companies. However, its high price compared to conventional diesel and its efficiency was not much higher, meant that only 90 units were sold and its production was canceled. Even so, it laid the foundations of technology and was a forerunner for the time.