A few months ago the Audi S4 arrived on the market. This is the most powerful variety of the A4 2020, thanks to the mechanics that are also used by the new Audi S5 and the Audi S7 Sportback, a supercharged six-cylinder that delivers a whopping 347 hp. It is an option that can be chosen with the family body, the A4 Avant 2020. In this case it is not the most powerful of the range, since there is the new RS 4 Avant (450 HP) that has honored the history of the family RS effective since 1994). Who could then interest the Audi S4 Avant? The brand itself points to the S4 has been thought for those who demanded a “good relationship between benefits and consumption”. The family body also provides a remarkable cargo space, specifically 495 liters for the 460 of the sedan a figure consistent with that of other family media in the market.

And without a doubt the RS 4 Avant is a car not intended for all audiences. There is no Audi S4 Avant, with an unparalleled mechanical configuration in the segment. One can choose the Mercedes Class C Estate gasoline to have a similar power level, the C 43 4Matic of 390 HP or the BMW 3 Series Touring, which will feature the M340i X-Drive with 374 hp. But both are gasoline and without a doubt the consumption will not be comparable to those of the S4 Avant. The price is high, because the Audi S4 Avant is low at 77,485 euros. Account (in Europe, the same does not happen in China or the United States), with the 3.0 TDI diesel V6 engine, with 347 horsepower and no less than 700 Nm of torque, a very high figure. Although the benefits do not become like those of the rivals that we mentioned with a gasoline engine, they are very good: it is capable of reaching 100 km / h from a standstill in 4.9 seconds and, continue accelerating, establish 250 km / h of top speed. 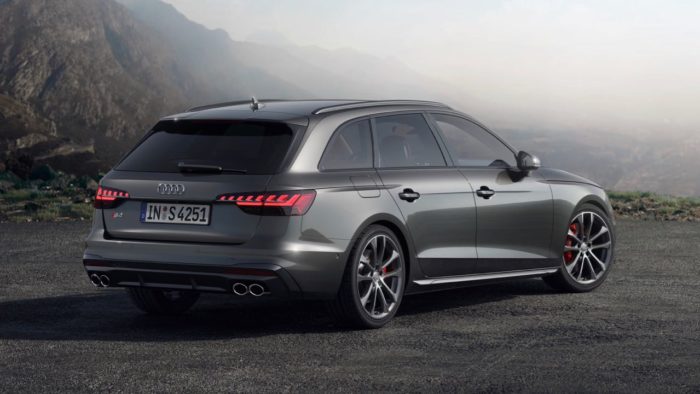 And all this, with a consumption of 6.3 l / 100 km, a low figure also thanks to a light hybridization system (soft hybrid) with a 48 volt battery that, although it is not able to move the car itself same, it helps in times of high demand and reduces the turbo delay because it integrates the compressor. The compact, air-cooled lithium-ion battery has capacity 0.5 kWh and is located under the boot floor. Thanks to this, it has the DGT ECO label. For the rest, like the sedan, it has the eight-speed Tiptronic automatic gearbox and the well-known four-wheel-drive system, which repairs the torque between the front and rear axles at a 40:60 ratio, but can send up to 70% of the total to the first and an 85 to the second if the sensors detect adhesion losses. The sports suspension has a specific adjustment and can have damping control. Highlight your front brakes with six-piston calipers and 375 mm in diameter or 18-inch wheels with 245/40 tires (among the optional ones, those of 19 with 255/35 tires or about 20 in 265/30). And, of course, it offers aesthetic details that you won’t see in other versions, such as specific exhaust outlets or S mode on the screen of the optional Audi virtual cockpit.