We have already spoken on occasion of Designworks, a BMW affiliate company that is dedicated to design. We have seen how they act in other areas different from the automotive sector and also how the IONITY chargers did. Now at the CES in Las Vegas, they arrive with a kind of caravan, a portable shelter that has been developed jointly with clothing firm The North Face. The key in this case has been the protection of any weather element.

Because although it seems that it is made of fabric and will not resist the low temperatures, it is made of a new material that has been named Futurelight. It is totally waterproof and breathable thanks to Nano spinning technology, so we are talking about one of the most advanced textile materials in the world. With this process you can create holes of nanometric size to allow ventilation and at the same time not to enter liquids.

The shelter has been conceived as a trailer, with two wheels and a hitch to be taken anywhere. The fabric has been arranged in a dome shape in a way that may come to resemble the BMW Gina Light Visionary Model prototype of 2008, which follows a similar idea. Inside this portable shelter of BMW and The North Face there is room for two people to sleep completely protected from the weather in the mountains, but this refuge is a conceptual model and its arrival in production is very doubtful. 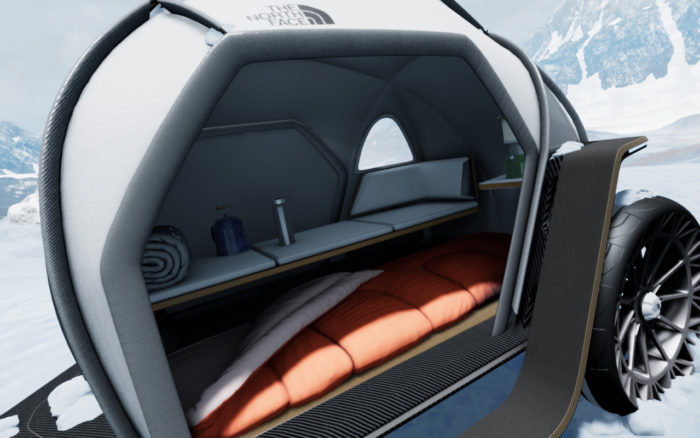 Although it could be applied in other areas, the North Face has confirmed that its Futurelight fabric will be present in some of its next autumn 2019 clothing collection. As for BMW, it has been pursuing the idea of ​​combining adaptable fabric to its bodies for quite some time we hope they surprise us with something similar in production.