After the new X5 M and X6 M, the BMW M product portfolio has just been expanded with the arrival of the BMW M8 Grand Coupé 2020 and its more performance aspect, the Competition model. We saw it just a year ago in the form of a prototype and, like its SUV brothers this four-door sedan is capable of generating up to 625 HP and 750 Nm thanks to its V8 bi-turbo.

In aesthetic terms, the front part is transferred directly from the Coupé model. As a result, the M8 Gran Coupé has a black double kidney grill that is located above the lower air intakes more aggressive than in the rest of the range. The sporty style continues with aerodynamic rearview mirrors, a carbon fiber reinforced plastic roof (CFRP) and 20-inch light alloy wheels. Other highlights include a more prominent rear bumper, a small spoiler mounted on the trunk and an exhaust system with four exhaust outlets. To achieve a more exclusive look, customers can request the optional M Carbon package, which adds a variety of CFRP components, such as in the mirror housing, rear diffuser, rear spoiler and inserts for front air intakes. 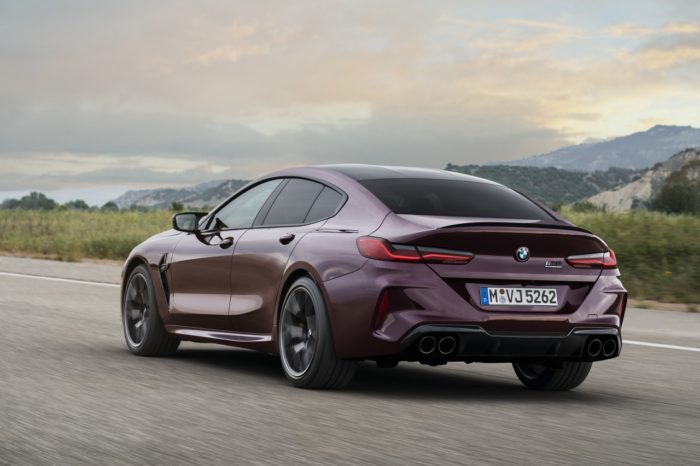 Upon entering inside, drivers will find a variety of specific details. These include M Sport seats, sports leather steering wheel and an exclusive gear selector. The model also has a 12.3-inch digital instrument cluster, a 10.25-inch infotainment system and a Head-up Display. Other highlights include carbon fiber moldings, ambient lighting and wireless charging. From a mechanical point of view, the BMW M8 Gran Coupé is practically identical to its two-door counterpart. It has the same V8 engine of 4.4 liters bi-turbo of 600 HP and 750 Nm of torque (625 HP in the Competition model). To adapt that extra space, the BMW M8 Gran Coupé is 230 millimeters longer, 35 mm wider and 58 mm taller than its two-door M8 brother. 200 mm of that length belong to the wheelbase, so the rear seat has much more legroom than the standard Coupé. The only penalty is the weight, with 84 kilos more mass compared to the model from which it derives, which has a total weight of 2,032 kg.

However, it is still a fast car. The BMW M8 Gran Coupé makes 0 to 100 km / h in 3.2 seconds, while the M8 Competition Gran Coupé achieves the same record in 3.1 seconds. They are, exactly, the same numbers that the two-door shed achieves. The maximum speed is limited to 250 km / h, although those looking to go further can opt for the M Driver’s Package, which increases the maximum speed to 305 km / h. The new BMW M8 Gran Coupé is presented at the Los Angeles Auto Show later this year, and the first units will begin delivery in April next year.