ClearMotion is a Massachusetts-based company that took over Bose’s revolutionary proactive suspension technology. Now, it has just raised 100 million dollars to market it, but in a different way than the original: to make autonomous cars mobile spaces more effective and comfortable. Bose Ride suspension technology was a promising technology that tried to keep the car always at the same height, thanks to sensors located on the wheels. It managed that the car did not move in the curves and could step on bumps without any problem since the movement was not transmitted to the passenger compartment. All this uses technology of magnetic loudspeaker controllers (the specialty of Bose), but in a radically different way.

Today many high-end cars already use active suspension, but most systems on the market simply adjust the suspension damping to make changes in the quality of gear, extending and narrowing the valves in a fluid transfer system in suspension or using fluids that can change its viscosity almost instantly in response to an electromagnetic signal. The Bose system was different. It was designed to read the road before the vehicle and determine, for example, where there was a bump so that, let the wheel fall closer to the hole or faster. That makes the passengers gain a lot of comfort, as well as maximizing grip and safety. 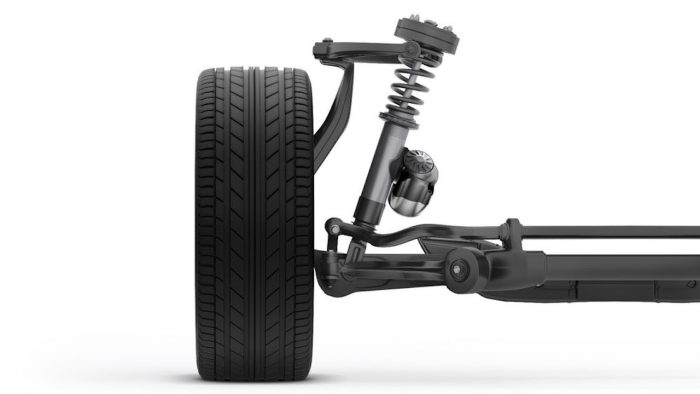 At the end of the pothole or when finding a shoulder on the track, the system would use the kinetic energy provided by the bump to recover energy that the suspension itself uses. Thus, the energy consumption was laughable, barely a third of what a standard air conditioner uses. Bose was improving this technology from 1980 until he presented it in 2004. It became famous for its speed and power, to the point that it was able to launch a car through the air. It never reached the market, perhaps because the brand did not know how to apply it correctly to an unknown industry, either because the system was too expensive or because it was extremely bulky. The Audi A8 2018 has a similar system and much more compact.

But this story does not end here. ClearMotion bought all of Bose’s technology last year and is working hard to bring it to market. The first thing has been to reduce its size, to occupy as standard shock absorbers. And they have worked with suppliers such as Bridgestone or Qualcomm to get it to production vehicles.

Its vision is radically different from Bose’s. While the ideologists of the system saw it as appropriate for high-end cars focused on sportsmanship, ClearMotion has oriented it towards a much larger future market: autonomous cars. Of course, it makes a lot of sense, because the driver can wait for bumps or curves, but in a future where we are all passengers, presumably we will spend our time in the vehicle with other tasks. Working with computers or mobile devices, or even eating and drinking will be much easier with such a suspension.