If you are tired of so many news of electric vehicles and autonomous technology, this news may encourage you the day. It is not ecological, it is not practical, it is large and heavy, but, above all, very politically incorrect. The Dodge Charger SRT Widebody 2020 is the scourge of the new automotive industry, with an aspect and sound of the underworld. Here is the cavalry of hell. You have to admit, Dodge deserves a round of applause. Both the Charger and the current Challenger are two vehicles with many years behind them, and even more so if we take into account that they were designed under the platform of the Mercedes-Benz E-Class W210, a structure born in 1995. With the arrival of models Hellcat, FCA (owner of Dodge) hit the table, and another hit the Challenger Demon.

Like the Challenger Widebody, the saloon version is defined by its wide body, which is now standard on the entire Hellcat range and an option in the Scat Pack. The new fins add a total of 89 mm to the sides. Dodge has also modified the front and rear bumpers and added new wider side flaps. The Hellcat gets a new unique spoiler, while the Scat Pack is maintained with the same one that uses its curt twin. Consequently, the 2020 Dodge Charger Widebody now has 20-inch diameter tires wrapped in 305/35 tires, on both axles. Other highlights include an adaptive suspension tuned by Bilstein (34% stiffer) with three selectable hardness modes. The braking equipment is signed by Brembo, with 390 mm discs and six-piston calipers on the front axle. 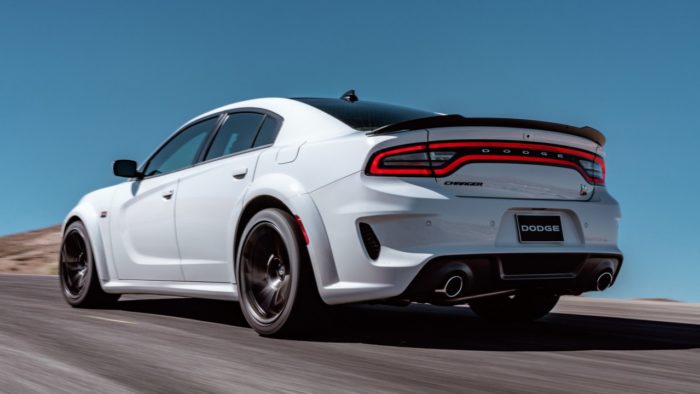 The Widebody Charger Scat Pack is powered by a naturally aspirated 6.4 liter Hemi V8 engine that produces 492 PS and 644 Nm. It is connected to an eight-speed automatic transmission that sends all the power to the rear wheels. This configuration allows the American sedan to accelerate from 0 to 96 km / h in 4.3 seconds and finish the quarter mile in 12.4 seconds at 179 km / h. The most powerful option, the Charger SRT Hellcat Widebody, rewards its owners with a 6.2 liter supercharged V8 with 717 HP and 881 Nm of torque. Figures that allow the sedan to jump from 0 to 96 km / h in 3.6 seconds, before reaching a maximum speed of 315 km / h. Dodge says this model is the “most powerful and fastest sedan of mass production in the world”, if we do not count the new Bentley Flying Spur with its peak 333 km / h.

Speaking of performance, the model comes with four “race-inspired technologies.” It includes a launch control system that uses speed sensors in the wheel and in milliseconds. Other features are a rear axle locking system for crazy wheel burn and a Race Cool down feature that helps cool the mechanics after heavy use on the circuit, even with the engine off. All these improvements mean that the new Charger is an even more impressive circuit machine.