It is often said that we are in the season of miracles. Of course, getting a car is not really a miracle per se, unless we are talking about an average family looking for something as spectacular as a Lamborghini Aventador S. In this case, we find ourselves dreaming of driving one, starting to build a replica, and end up enjoying Christmas to have a real one.

Xander Backus, 11, loves Italian sports and loves to compete in video games with his father, Sterling. One day, Xander asked his father if they could build a real Aventador, and being a great father, they started the project. It has been a year and a half since then, and although the car moves by itself, there is still a long way to go. It’s a story is touching for anyone, especially for people like us.

Lamborghini learned about the Backus family and their project, built mainly with 3D printed panels and lots of love. They sent a photography team to the state of Colorado to present the family in a Christmas video, but they also sent something else: a shiny new Aventador S. As the short film shows below, the car was secretly exchanged in the early hours of the morning.

Apparently, except the father, no one else in the family knew what was happening. The look on young Xander’s face when the garage opens says it all. Friends, that is the dream of an 11-year-old boy come true. Could I have finished the year better? Unfortunately, the Lamborghini Aventador is not a permanent addition to the family garage. The vehicle is borrowed for a couple of weeks, and only to be enjoyed. 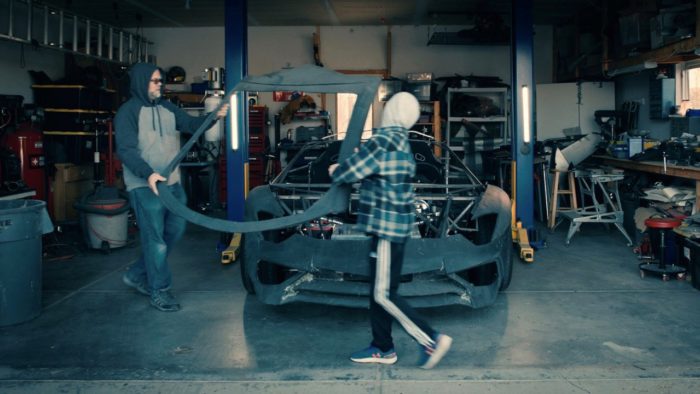 Katia Bassi, director of marketing and communication for the brand, said: “Auto Lamborghini is against any counterfeit attempt. However, a true story of authentic passion deserves to be presented, so we chose to tell Sterling and Xander’s project in our 2019 Christmas video”. And it turns out that, although it is positive publicity for Lamborghini, the truth is that the company has done something good for Christmas.

Meanwhile, the construction of the replica continues and is documented on Facebook. Father Backus intends to turn his work into an educational tool. But after 20 months of effort, he and Xander will probably enjoy taking a vacation in the car that started it all. And although there is no atmospheric suction V12 under the hood, the 5.7-liter V8 (LS1) of a 2003 Chevrolet Corvette (C5) with two added turbos that will surely not disappoint.