Hyundai has been demonstrating for a long time that it wants to be a benchmark in the future in technology. He has shown us advances in safety such as this central side airbag or in driving aids such as his cruise control that he learns from the driver. Now Hyundai talks about Active Noise Control (RANC), a system that is a world first and will serve to improve comfort in the interiors of their vehicles.

Currently, they already have active noise control (ANC) technology, which consists of emitting inverted sound waves to incoming noise. The software analyzes the sound inside to counteract the sound of the engine and the tread. It has the advantages that it is lighter than putting a lot of sound insulation and is quite effective. Although the truth is that it still had limitations, because it could only be used when the noise was constant and the occurrence of predictable noise.

That is precisely what is solved with the new Active Rolling Noise Control. Using an acceleration sensor, the system now allows you to analyze various types of noise in real time, for example those created between tires and tires or those that rumble from the road. In this way, it is analyzed in just 0.002 seconds and sends it to the DSP, which is responsible for producing the inverted sound wave towards the driver’s seat, the passenger’s seat and the rear seats separately. 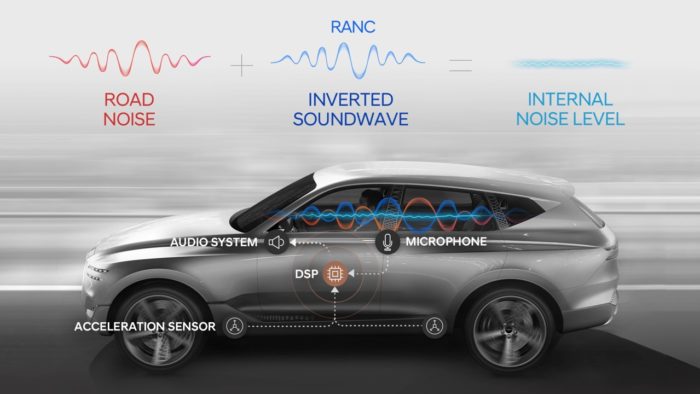 In practice, Active Rolling Noise Control manages to reduce cabin noise by 3 db. This allows Hyundai to reduce the unrestrained mass of its vehicles, as not many acoustic insulation parts and dampers are necessary. The truth is that Koreans have been working on this system for six years. Now they have obtained the patent in their home country and in the United States, so it is only a matter of time before they start to mount it in their production vehicles. The first to wear it will be a new model of its luxury brand Genesis.