In luxury brands it is common to see configurations of all kinds, including some special requests from some users. Almost all these manufacturers have divisions that are responsible for making the most peculiar customizations come true. After the lunar dust in the painting of an Aston Martin, the next thing that comes to us is the fingerprint on a Porsche 911. No kidding, the mark can act as if the user has put his finger on the hood.

It is one of the latest ideas of Exclusive Manufaktur, the customization department of Porsche in Zuffenhausen. From there they are clear that the individualization of the vehicle is essential (they do not make more than two 911 identical per year) and put new tools at the service of the customers. Now they have developed a direct printing method that opens new doors to the brand, allowing to include high quality graphic elements directly on the body.

It is a way to integrate new technologies in the process of creating a vehicle. It began as a special project in the paint shop, where a “technology cell” was located that resulted in this type of direct printing. Porsche technicians had to work hard to get to this kind of printer that has a head, controlled by a robot, which is applying the paint accurately and without excessive spraying. 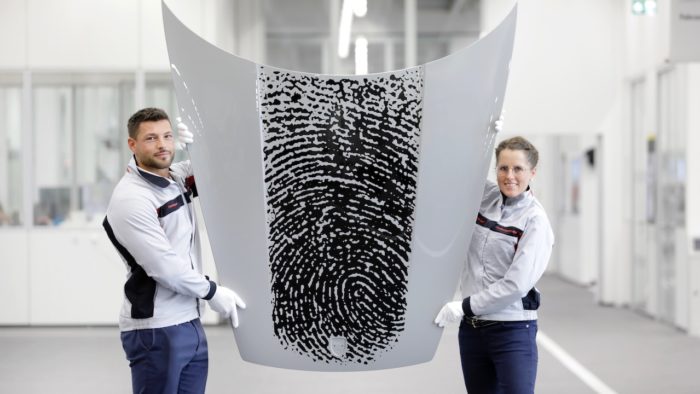 To release it they thought of something as special as replicating the user’s fingerprint on the hood of the Porsche 911. It should be noted that this biometric data is processed so that it cannot be used for unauthorized purposes. The service can begin to request from the month of March and has a cost of 7,500 euros. While we still doubt how many users will be able to do this, the brand already announces that in the medium term new specific designs will come out with this technology.