The Korean automaker plans to significantly expand the range of electric vehicles by 2027.

Kia intends to “reclaim its place in the sun” in the global electric vehicle market. At the beginning of this year, Kia announced a development strategy called “Plan S”. It is designed for five years, until 2025. According to this plan, the brand will gradually electrify the lineup and abandon the use of internal combustion engines. In addition, there is a shift in focus on SUVs and an increase in their share in the model range. Another point of the strategy is to increase the rate of production of cars.

Now in Kia showed a teaser of future “green” new products and published a clarification on the strategy. So, the production of seven cars, whose silhouettes are visible in the image, will start before 2027. According to the “7 cars” presented in the picture, there is almost no specifics from the company yet.

It is only known that the firstborn of the new “socket” line of Kia will be a car developed under the CV project. The company promises to present it in 2021 as a global model targeting multiple regions. The novelty will be based on the E-GMP platform. It is expected that the range on one charge for this electric car will be about 500 km, and its appearance can be made in the style of the Kia Futuron concept, which was presented in November 2019. 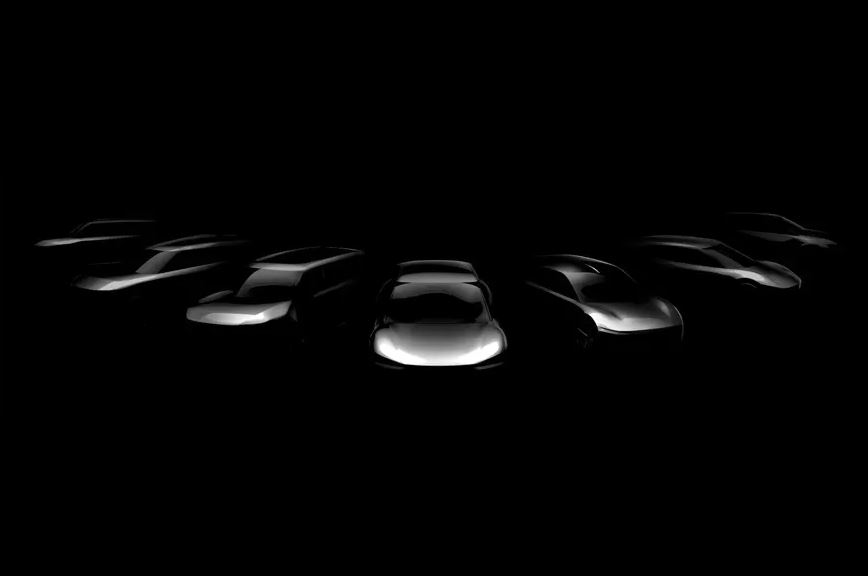 By the way, the E-GMP (Electric-Global Modular Platform) cart was jointly developed by Kia and Hyundai. The partner, in particular, intends to produce “green” cars of the new Ioniq family on this platform: first, in early 2021, the Ioniq 5 SUV will appear on the market (its forerunner was last year’s Hyundai 45 concept); in 2022, the Ioniq 6 will be on the conveyor

( based on Hyundai Prophecy); and a couple of years later, the production of full-size crossovers Ioniq 7 starts.

Returning to the list of new Kia products: it will probably also include a production car based on the Imagine concept, which was called a kind of “fusion” of an SUV, a crossover and a sedan. Recall that the show car was presented at the beginning of March 2019 at the Geneva Motor Show. At the end of last year it became known that a production model was already in development. There is no information about the “stuffing” yet. Hyundai and Kia will develop a new platform for electric cars

The company expects that by 2029, the share of electric vehicles in the structure of global sales of Kia will account for one fourth (25%), at an intermediate stage – by 2025 – the manufacturer intends to achieve a 20 percent share of “green” cars in the total sales of the largest and most important markets for the brand are Korea, Western Europe and North America.

We will remind, in the spring of 2020, it became known about the plans of Kia to release a competitor Citroen Ami. The novelty will be a city electric car, even more compact and affordable than the Picanto (the price tag of Citroen Ami on the home market is 6.9 thousand euros). This new Kia is expected to go on sale in 2022.