Statistics shows that the struggle for the buyer in the class of compact crossovers is quite tough. Each company is trying to do everything possible in order to benefit from the popularity of this segment. The Japanese could not help noticing this trend, so in 2011 at the Frankfurt Motor Show, a new crossover Mazda CX-5 was shown.

The model is a full-fledged second generation, and not just another restyling. It is not difficult to distinguish a novelty from its predecessor, it has stylish elongated headlamps with lensed optics and elegant sections of LED daytime running lights. The grille is made in the corporate style, it consists of many tiny cells and sports a chrome-plated manufacturer’s logo. Below, on the front bumper, is a narrow air intake, on the sides of which you can see a couple of small fog lamps. In general, the car has received a new, modern appearance, but at the same time has not lost the family traits and is still well recognized on the road. Real Samurai: Mazda CX-3

Mazda CX-5 is a five-seat crossover. Its overall dimensions are: length 4550 mm, width 1840 mm, height 1690 mm, wheelbase 2700 mm, and the amount of ground clearance is 192 millimeters. Such clearance is peculiar to the cars prepared for severe conditions of operation. They can easily take a trip through the dirt road, they can storm the curbs while parking and maintain an acceptable smoothness while driving on a bumpy paved road.

The trunk of the Mazda CX-5 has a good capacity. With the raised backs of the second row of seats, up to 505 liters of free space remains behind. Thanks to this volume, the car will perfectly cope with the daily tasks of a city dweller and will not lose face even during a long trip with an abundance of baggage and several passengers on board.

Mazda CX-5 is equipped with three engines, automatic and manual variable speed gearboxes, as well as front-wheel drive or four-wheel drive. Due to the wide range of presented units, the car becomes quite versatile and is able to satisfy most of the requirements of a potential buyer.

The base engine of the Mazda CX-5 is the inline atmospheric petrol four of 1998 cubic centimeters. The direct fuel injection system allowed him to develop 150 horsepower at 6,000 rpm and 210 Nm of torque at 4,000 revolutions of the crankshaft per minute. The crossover with all-wheel drive and automatic transmission accelerates to a hundred in 10.6 seconds, and the maximum speed, in turn, will be 184 kilometers per hour. Despite the good power, the power unit is quite economical. The fuel consumption of the Mazda CX-5 will be 8.9 liters of gasoline per hundred kilometers in urban traffic with frequent acceleration and deceleration, 5.9 liters during a measured trip on a country road and 7 liters of fuel per hundred in the combined cycle. Mazda pronounces: it will make six-cylinder engines in line 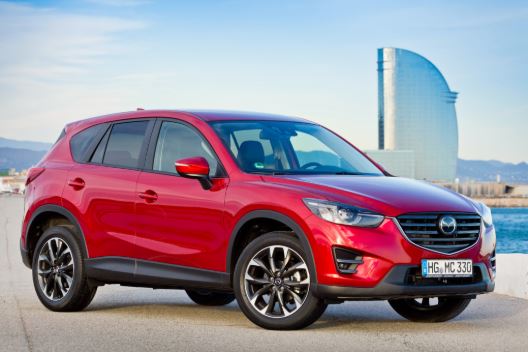 The top versions of the Mazda CX-5 are equipped with a row atmospheric gasoline four of 2488 cubic centimeters. Due to the increased volume, the engineers managed to squeeze out 194 horsepower at 6000 rpm and 257 Nm of torque at 4000 rpm of the crankshaft per minute. With such a herd under the hood, the crossover will accelerate to a hundred in 9 seconds, and the speed ceiling, in turn, will be 195 kilometers per hour. Fuel consumption Mazda CX-5 will be 9.7 liters per hundred in the city, 6.1 liters on the highway and 7.4 liters per hundred in the combined cycle of movement.

Mazda CX-5 keeps up with the times. It has a stylish and eye-catching design that will emphasize the character and personality of its owner. Such a car will not dissolve in the gray stream and not get lost in the large parking lot of the mall. Salon is a realm of high-quality materials of finishing, verified ergonomics, practicality and comfort. Even a long trip will not be able to deliver unnecessary inconvenience. The manufacturer is well aware that in the first place, the car should give driving pleasure. That is why, under the hood of the crossover is a powerful and technological power unit, which is a fusion of innovative technologies and legendary Japanese quality. Mazda CX-5 will serve many kilometers and will give unforgettable emotions from driving.