The CES of Las Vegas is one of the events of the year at the technological level and car manufacturers come with the systems they propose for the future and even with the occasional prototype. The Mercedes Vision AVTR Concept is the proposal of the German brand and seeks to strengthen the connection between the vehicle and the driver. Its acronym means “Advanced Vehicle Transformation” and is inspired by the popular movie “Avatar” by James Cameron, as they have reached a collaboration for the sequels that are being prepared.

It is a very futuristic prototype that has a differentiated design that has nothing to do with what we are used to. On the front stand thin headlights and joined by the center, with the star logo illuminated on that grille. Those voluptuous wheel arches do not go unnoticed, in which some illuminated tires also stand out, or the two huge glass doors. In the rear we find 33 fins that can be deployed or hidden according to aerodynamic needs.

And if the outside attracts attention, the cabin is science fiction. Here we find the link between driver and vehicle that honored the film. By putting your hand on the center console, the Mercedes Vision AVTR Concept will measure some user biometric data (such as the pulse) to create a proper atmosphere (change the temperature, seats or lighting). There are no controls or traditional screens, the images are projected on the surface that joins dashboard and center console.

All the materials used inside are sustainable and environmentally friendly. It has a Dynamic vegan leather that has been made with old clothes, flags and recycled plastic. The Karuun wood that adorns the prototype floor is made of rattan. Also striking is the absence of steering wheel and pedals, but this is a completely autonomous vehicle designed so that users do not have to drive it. 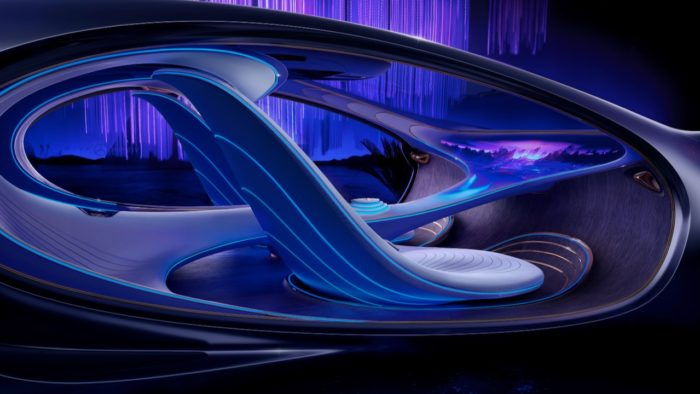 The Mercedes Vision AVTR Concept moves thanks to an electric propulsion system that is also very innovative. It has four engines (one on each wheel) that combine to achieve a power of 475 hp. The battery has 110 kWh capacity and is made of organic graphene-based cells, so it does not require rare earth and is fully recyclable. With it he is able to reach an autonomy of up to 700 kilometers.