Some time ago we reviewed the lightest Porsches in history. This exciting list was headed by the Porsche 909 Bergspyder, a model of competition that in the 60s was presented weighing only 384 kg. That record figure recently inspired the Stuttgart brand, which commissioned its engineers to work very specially. It was a contemporary application of the previous philosophy and became a reality through the Porsche Boxster Bergspyder.

It was in 2015 when this project began in the strictest of secrets. It took a Porsche Boxster 981, the model corresponding to the previous generation that was later replaced by the current 718 Boxster. All kinds of changes inspired by the original 909 Bergspyder were applied to the convertible. It was reduced to the minimum essence so that it was as light as possible and it applied its same livery in white with green details. What is most striking at first glance is the removal of the windshield, which is replaced by a small deflector. Also that cover that covers the place where the co-pilot seat would be, this prototype is a strict single-seater. You can add a canvas roof that pays tribute to the Porsche 356 Speedster of 1954. Inside were installed elements of the Porsche 918 Spyder and there is hardly room for the helmet and some equipment.

The result is that this Porsche Boxster Bergspyder weighs only 1,099 kg, a reduction of around 300 kg compared to other versions. In addition, it becomes a model of the most interesting thanks to the same six-cylinder and 3.8-liter boxer engine that rode the Cayman GT4. Thanks to this he is able to accelerate from 0 to 100 km / h in less than 4 seconds and complete a lap in the Nürburgring in about 7 minutes and 30 seconds. 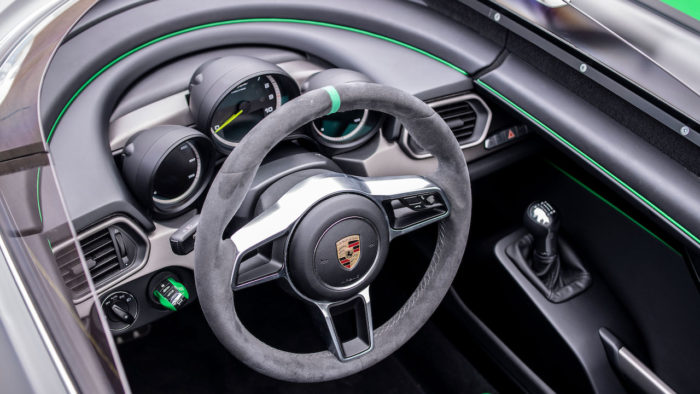 And the truth is that during those months, Porsche seriously considered whether a limited production of this Boxster Bergspyder would make sense. Although the potential is clear, the truth is that they would have had problems to standardize it in some countries. So the brand only created this prototype that has been in the development center in Weissach so far. Once made public, this issue will be exhibited to the public at various events and at the Porsche Museum.