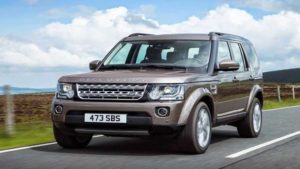 The premiere of the 5th generation of Land Rover really surprised! The presentation took place not only in Paris Motor Show, but also at home of the car.

For presentation developers made a copy of Tower Bridge from Lego bricks, which took 5,805,846 shares ( new achievement in Guinness Book of Records). On the movable sash of bridge were parked two new Discovery.

In new Land Rover Discovery has changed almost everything. Now SUV has a new platform and a body made of aluminum. This car became lighter by 480 kg.

New design “Disco” is very similar to “junior» Discovery Sport, it is allowed to bring the drag coefficient to 0.33 cX.

Discovery Overall length of the fifth generation in comparison with the fourth increased to 4 970 mm (plus 141 mm) and wheelbase size has grown by 38 mm – up to 2923 mm. Jaguar Land Rover Drones Will Have a Human Character

The novelty has seven seats, besides the interior can be configured remotely via the app on your smartphone.

The system does not allow to move the seat when something is lying on it or on its backrest folded down.

In the company says: many automakers offer seven-seat SUVs, the new seven-seat Discovery too, but it’s the only model that offers third row where people fit the 95th percentile.

Nevertheless, the trunk of the novelty is rather small – only 258 liters when are folded seats of the third row, the figure rises to 1231 liters, and if you sacrifice the second row, it will be available for 2406 liters of usable space (up to 2 500 liters in five-seat version) . Used 2001 LAND ROVER RANGE ROVER LWB 4.6SE Wagon 4 Door Car For Sale At AuctionExport

Despite its glossy appearance, Discovery still can be called a SUV that can overcome obstacles on the road. Clearance has been increased by 43 mm – up to 283 mm! Fording depth – 900 mm, the increase was 200 mm.

At speeds above 105 km / h the suspension automatically lowered by 13 mm to reduce drag, on unpaved surfaces at speeds up to 80 km / h clearance will be increased by 40 mm from stock values on the roads – the car will lift suspension by 75 mm. Used 2012 LAND ROVER LR4 HSE SPORT UTILITY 4 Door Car For Sale At AuctionExport

In the arsenal there is a transfer case with reduction gear.

Wheel-drive system in standard mode distributes torque at a ratio of 42:58 (front and rear axles respectively), electronics, depending on road conditions can change the aspect ratio to 62:38 or 22:78.

The range of engines includes diesel «Quartet» Ingenium capacity of 180 and 240 hp.

Also new Land rover Discovery provides a wide variety of assistants, among which is off-road cruise control assistance system at the start of the hill, on the slope, on slippery surfaces, the sensor depth of water obstacles, Assistant Trailer towing with automatic valet parking (driver “plays” only the gas pedal , steering takes over the automatic), sky cameras, projection display, the system of autonomous emergency braking, track the status of the driver, recognition signs and pedestrians.

Also will be available a bracelet Activity Key, which allows you to open and close the car without the help of a set of keys; it is waterproof and suitable for outdoor enthusiasts.

For infotainment system functions is responsible InControl Touch, which is an eight-inch touch screen with trim S and SE and comes in versions of higher level – with a ten. The functions can be expanded by purchasing equipment packages – Wi-Fi hotspot, navigation with the function of monitoring the traffic situation in real time and so on. The car can be ordered with a six-12V outlets and nine-USB-ports.