RUF is a small carmaker that had always been popular for its reinterpretations of the Porsche 911. Although it goes without saying that they no longer use their platforms. Currently they have a carbon fiber monocoque that is used by the RUF CTR and RUF SCR, the most recent launches of the brand. Now it is also assembled by the RUF Rodeo Concept, a most curious prototype that could go into production in the future.

It maintains that link with the Stuttgart brand, in this case with a clear inspiration in the Porsche 911 Safari. That specimen that was prepared for the competition has been replicated by RUF, always giving its vision and its own style. What strikes the most at first glance is the adventurous aesthetic, with that elevated suspension and Michelin-signed off-road tires shimmering those eye-catching gold rims.

They match the bodywork in two colors, with that combination of green and gold. It looks like something out of a western movie with that metal protection with a rope in the front, additional headlights, a luggage rack with leather cases on the roof and even a shovel in the back, on the engine cover. The interior uses brown leather upholstery with a really attractive look and patterns that evoke the classic. 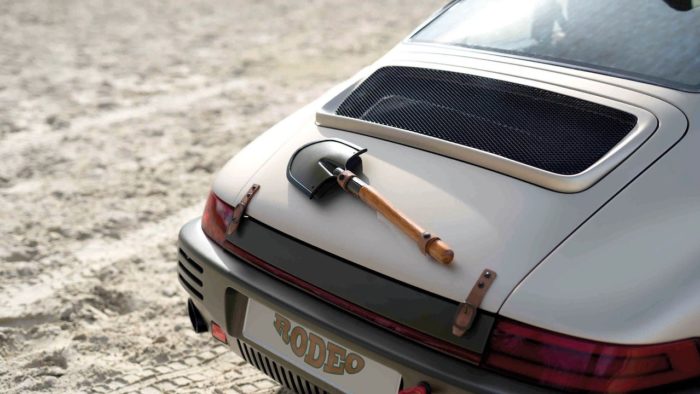