The 2016 Nissan Sedan debuted at the auto show in New York under the American name Altima, in 2015. The design of the 8th generation of the novelty, which was based on the Nissan Sport Sedan concept, received a more pronounced sporty character. Front optics has an acute-angled shape and slightly “torn” edges, which are emphasized by LED backlighting. The sculptural lines of the hood find their logical conclusion in the form of a chrome-plated V-shaped brace on the grille and a small air intake is very conservative, as for a sports sedan. From the side, the sedan looks quite restrained and impressive, due to straight lines. Most stand out front wheel arches, inside which are 18-inch wheels. Also, you should pay attention that the door handles are chrome-plated.

Behind, the arrow-shaped headlights “crawl” quite strongly on the side parts of the body, and under the black plastic line of the rear bumper there are two tailpipes of the exhaust system. If you say a sedan in numbers, then he was 56 mm longer and 33 mm lower. Also, the weight decreased by 37 kg, and the torsional rigidity of the body strengthened by 25 percent.

Salon of Nissan Altima in standard and medium configuration looks quite modest and concise. The driver is located in an armchair with a small lateral support. In front of it is a three-spoke multifunction steering wheel with aluminum inserts and shift paddles. The instrument panel is represented by an analog speedometer and tachometers, and between them there is a color display of the onboard computer, separated by an aluminum frame. The center console provides access to the multimedia control system and climate control. The back sofa is high enough and has a large stock of legroom.

The 2.4-liter powertrain provides the Nissan Altima sedan with 185 hp. power and 244 Nm of torque. The engine is paired with a continuously variable variator with the Gen 3 D-Step system. Thanks to her and quite low weight, the car consumes 8.7-liters per hundred in a city mode. Also worth noting is a new, softer and more comfortable suspension. 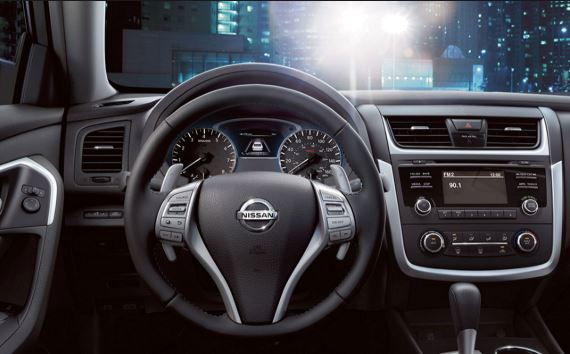 In total, five modifications of the Nissan Altima are available. Basic equipment costs at least 23,400 USD In the US.