The race of the 24 Hours of Le Mans next month will be the last of the signature of the oval for the current program of the Ford GT, at least with factory backing. The car fulfilled its purpose: it was registered four years ago and, in 2016, it won the big race again, giving Ford the headlines it needed. Now, Ford is getting rid of this expensive international sports car program as a bad habit. The team has one last chance to participate in the iconic French event, and the cars well, three of them at least, will do so in style and with some incredible decorations. A US quartet will celebrate the company’s previous successes at La Sarthe.

The black and white livery (# 66) commemorates Ford’s victory in 1966 with Bruce McLaren and Chris Amon at the wheel. The red and white GT (# 67) corresponds, similarly, to the victory of Dan Gurney and AJ Foyt in 1967. The winning Ford of the GTE Pro class of 2016 returns with the same red, white and blue decoration, it was wearing during three years. The fourth car (# 68), in a magnificent light blue with red accents, commemorates a strange situation lived in 1966. Technically, the Ford GT driven Denny Hulme and Ken Miles dressed in this color scheme crossed the finish line first. Ford was running in 1-2-3 format, and it was called for the cars to finish in formation to hang a good photograph on the wall of a boardroom in Dearborn. 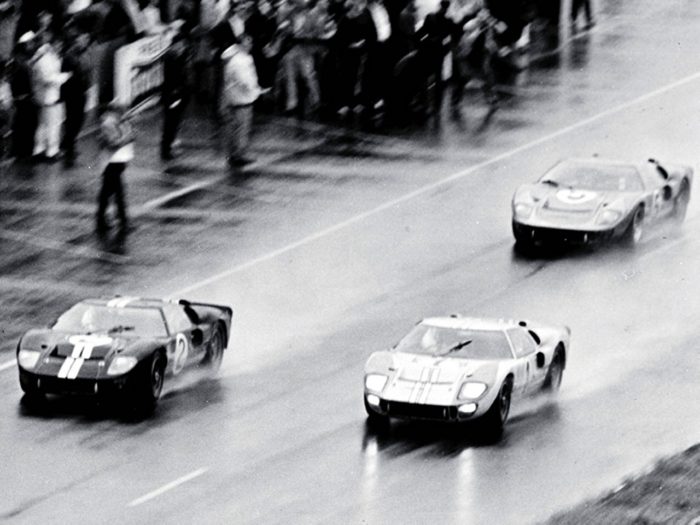 Because the black and white Ford GT of McLaren and Amon qualified behind the car of Miles and Hulme, and finished a few centimeters from each other, the victory was awarded to the black GT with number # 2. Thanks to this milestone, the American company could boast of having defeated the company that rejected a few years ago, Ferrari. The Ford GT was able to compete and beat the cars in red. There will also be a fifth unit (# 85) of the Ford GT at Le Mans this year, for the first time in the GTE Am category. Keating Motorsports has entered a private Ford GT with livery from Wynn’s and with Jeroen Bleekemolen, Felipe Fraga and Ben Keating sharing driving tasks.