We already know the Ford Mustang Mach-E. A car that bears the mythical pony car logo and at the same time has four doors, moves with electricity and can have all-wheel drive. Not to mention its interior, closer to that of a Tesla Model 3 than to any model of the brand. Does this lead us to think that maybe there is a family, within the brand, of Mustang with different bodies?

It is the first time that Mustang horses feed on electricity instead of gasoline, but the idea of ​​creating a Mustang with a more familiar look is not new. At the beginning of the 60s it was experimented with numerous Mustang prototypes that never reached production. There were from two-seaters to a four-door sedan in 1963. The meninges continued to squeeze even after the first Ford Mustang was launched in 1964. So much so that they even shuffled a shooting brake in 1966.

Like the fact that Robert Cumberford asked to finance the development of a Ford Mustang familiar, using one of the first coupes of the production line. The design had so much in the market that many dreamed of doing things using it as a base. 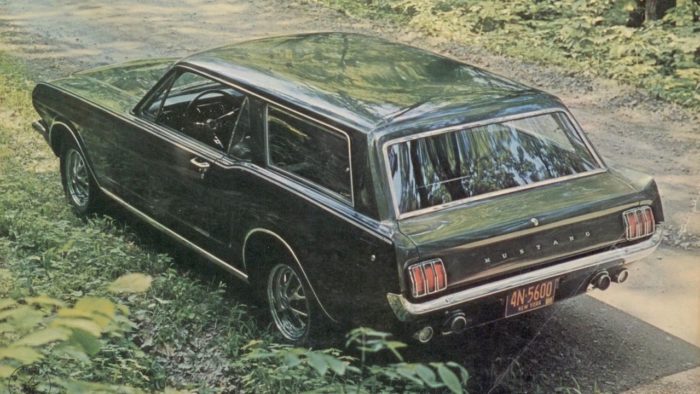 Cumberford chose Intermeccanica to carry out the conversion. He sent a series of drawings along with a white coupé powered by the V8 to Turin and returned a spectacular red familiar, with folding rear seats, loading compartment with rails, rear windows that could be opened. However at Ford he did not like the idea that he did something like that someone foreign to his company. And there was no one who had capital to materialize the project. The engineer says it was a model that was driven even better than the original, since “added weight to the rear, something very necessary.” And he had even thought about having a custom designed independent rear suspension kit, with the differential used by the Jaguar E-Type.

Thus, although he liked it, and much, it was not possible to take to production. The model was unique and Cumberford ended up selling it to a dentist in Portland, Oregon, whose family used it daily for years. His whereabouts are unknown today. Cumberford searched for it to buy it back and restore it, but couldn’t find it. Ford kept the family Mustang project in the drawer to focus on the coupe, fastback and convertible variants and then they had to focus on the second generation. But a decade later the project reappeared. Then they made a two-door familiar, based on the third generation of the Ford Mustang, but this prototype, which you can see in the photo gallery and that even had wooden panels on the sides, woody wagon, was never a serious candidate for get to be manufactured