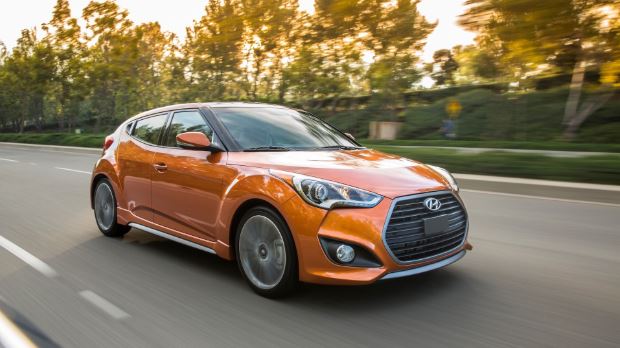 An unusual model with the name Hyundai Veloster appeared in the line of the South Korean company in 2011 – it was in that year that the official premiere of the car took place at the Motor Show in Detroit. In January 2015, an updated version of the hatchback debuted in Korea.

The highlight of the Hyundai Veloster is its original appearance with an asymmetric body solution: there is only one door on the driver’s side, and two on the passenger side, so it turns out taking into account the trunk lid – a four-door hatchback with swift outlines of the coupe.

The update that occurred is characteristic of the middle of the car’s life cycle: the bonnet’s relief was slightly corrected, another radiator grille and rims with a new design were separated – this is the end of the transformation.

The front of the extraordinary Korean hatchback flaunts with stylish head optics of complex geometric shapes with LED sections of the navigation lights, a sculpted bumper with a large air duct and elegant fog lights. The sportiness of the Hyundai Veloster silhouette is added by the front pillar, heavily littered back, turning into the roof with a line descending to the stern, muscular wheel arches with large “rollers” and a window sill rising sharply upward in the direction of the “tail”.

The rear part with stylish lights in the shape of a bird’s wing, a compact trunk lid and a powerful bumper with a central exhaust pipe contributes to the construction of a dynamic image of a four-door hatchback. Hyundai wants its autonomy to anticipate the actions of humans

The planned update did not affect the dimensions of the Hyundai Veloster body: 4220 mm in length, 1399 mm in height and 1790 mm in width. The wheelbase reaches 2650 mm, and the ground clearance is 143 mm.

The interior of the Korean four-door is made in the corporate style, but as a result of the planned restyling, it has not undergone significant changes – new finishing materials and a slightly modified dashboard have appeared. Before the eyes of the driver is a stylish multifunctional “steering wheel” and a contrasting “shield” of devices with a pair of deep “wells” and a small display between them – stylishly and perfectly readable.

On the center console flaunts a 7-inch color display of the infotainment complex, on the sides of which vertical ventilation deflectors are successfully inscribed. A little lower is the position of the air conditioning system of the original layout with a scattering of buttons and one rotating “washer”. As a result, the Veloster’s interior looks holistically and interestingly, and well thought out in terms of ergonomics.

The interior of the “Korean” is finished with high-quality materials: the front panel is made of soft and pleasant plastics, and the seats are dressed in a combination of fabric and artificial leather.

The four-door Hyundai Veloster is the owner of dense front seats with pronounced support on the sides. The seats are comfortable for riders of normal build, and also have sufficient adjustment ranges. The rear sofa is molded for two passengers, provides a good supply of space in the legs and in width, however, due to the shape of the roof of the head of tall people will rest against the ceiling. The narrow doorway makes access to the second row of seats somewhat difficult.

“Coupe-shaped Veloster” does not have a high level of practicality – the luggage compartment has a total of 320 liters. The shape of the compartment is almost correct, but the opening is narrow and the threshold is high.

Specifications. The Hyundai Veloster is equipped with a 1.6-liter MPI petrol four-cylinder engine equipped with a direct fuel inlet and a variable valve timing system. The maximum return “aspirated” is 132 horsepower and 167 Nm of torque, which is available at 4850 rpm.

The engine relies exclusively on a 6-band “automatic” in tandem (before restyling a 6-speed “mechanics” was also available), which generates traction on the front wheels, as a result of which acceleration to the first hundred takes 11.5 seconds, and at around 190 km / h peak speed recorded.

In the mixed driving mode, the Hyundai Veloster is limited to 7 liters of gasoline: in the city, the car requires an average of 9 liters, and on the highway – 5.8 liters.

The Veloster is based on the Hyundai-Kia concern platform, on which the i30 hatchback is also built. The car is equipped with MacPherson struts on the front axle and a twisting beam on the rear axle.

The steering mechanism of the “Korean” is equipped with an adaptive electric power, and the brake system “flaunts” the disk mechanisms “in a circle” and ABS.