The MINI John Cooper Works GP 2020 is probably one of the most anticipated releases for the most racing public. As we saw for the first time in 2012, this name is reserved for the most radical example of the brand, which has a really sporty set-up and almost for a circuit. It will be presented this year to celebrate the 60th anniversary of MINI and is already finishing its development phase in an essential place.

The prototypes of this model have been taken to the Nürburgring circuit (where they have recently been held 24 hours) to fine-tune their set-up. The MINI John Cooper Works GP showed itself still camouflaged but pleasantly surprised with its times. And is that he managed to make a return in less than eight minutes (no exact time is specified), ahead of its predecessor in almost half a minute (had a time of 8 minutes and 23 seconds).

It succeeds thanks to the great news that includes. First, it has a new development engine, a four-cylinder turbo that will surpass 300 HP, becoming the most powerful of the brand and surpassing its rivals. They have also taken special care to adjust their suspension and aerodynamics, something that is reflected in those large air intakes, the skirts or the striking roof spoiler. 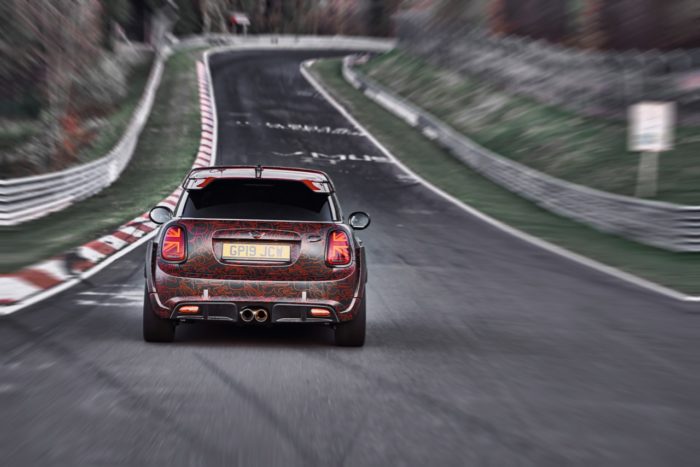 Because judging by the images of the MINI John Cooper Works GP camouflaged, it seems that it will have much in common with the prototype that anticipated it in 2017. The aesthetics of this model limited to 3,000 units is quite similar and some striking details have already been confirmed – light alloy wheels with that cross design or the double exhaust outlet positioned in the central part of the rear. We will be attentive for its official presentation, which will take place at the end of the year.