It is 30 years since the fall of the Berlin Wall, one of the best known symbols of the Cold War that represented the division of Germany at that time. The two well-known blocks were the Federal Republic of Germany (RFA), on the western side and with a capitalist system, and the German Democratic Republic (GDR), on the eastern side and Soviet influence. During those years there were many people who tried to move from one side of the wall to the other and, surprisingly, the BMW Isetta helped some.

It may surprise that someone can go in what was the smallest vehicle in the history of the brand, a post-war copy that had three wheels and a single front door. Precisely for that reason it was chosen for this mission, because nobody would think that it could shelter a stowaway hidden inside, no one except Klaus-Günter Jacobi, who devised the plan to transfer his friend Manfred Koster from the GDR to the RFA, passing through the controlled border.

When the story reached BMW’s ears, the German brand did not want to let it escape and decided to make a mini movie called “The Small Escape”. In less than four minutes a recreation of what really happened in 1964 is done. Jacobi and his family had managed to flee from the eastern part of Berlin to the western area before the wall was built, but there were people who stayed behind. It occurred to him that the way to get Koster out of there would be with his vehicle, with the BMW Isetta. 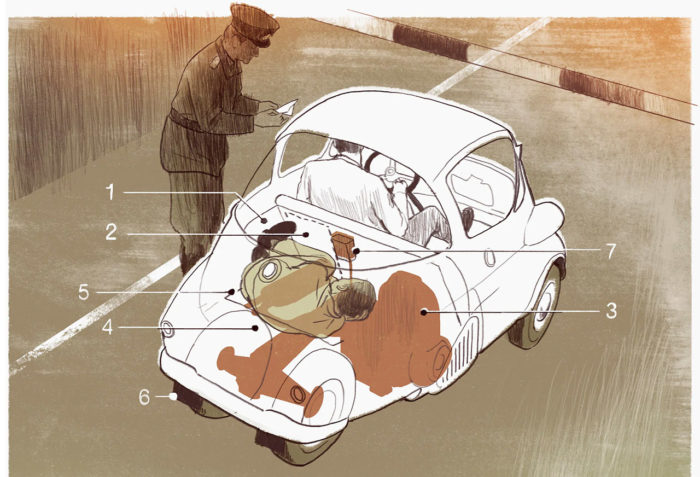 With just 2.30 meters long and 1.40 meters wide, this vehicle is already small for two people to travel and had to make room for one more to be hidden. Luckily, his knowledge of mechanics led him to build a drawer just behind the seats and very close to the engine. To do this he had to modify the sidewalk, remove the spare wheel, the heating and the air filter. He even got rid of the 13-liter fuel tank and instead put a barely two-liter canister. It would be fair for May 23, 1964, the good of Jacobi to cross the border between the two Germans with his hidden friend in the small BMW Isetta. It was the only time he helped someone escape directly, but his story would inspire others. During the consecutive years up to eight more people were counted who managed to flee the GDR aboard an Isetta in similar ways. The BMW movie is a faithful reproduction at the time with decorations and an atmosphere that takes us six decades back in time.