Since the invention of cars, one fact remains unchanged: the wheels are round. This is because it is the perfect way for the vehicle to move forward or backward. We do not believe that will change in the near future, no matter how much companies strive to reinvent it. However, YouYube WhistlinDiesel channel guys wanted to see what it is like to have square wheels in a GMC Sierra pick up.

They claim to be discrediting a challenge that MythBusters assumed years ago, but we all know that this was mainly about having fun. And the truth is that it is not the first time that we bring you some madness of this channel, like that time where some tractor tires in another pick up seemed a good idea. Because let’s be honest, both are as practical as wondering if one would react well to a crotch kick.

There are a couple of key differences between the pick-up of the youtubers and the Mythbusters experiment. First, the battered GMC Sierra is driven through extremely soft and muddy terrain instead of a firm, dry pavement. The host really acknowledges this fact and mentions that he should help the red van move more easily. Although they moved at higher speeds, up to 80 km / h compared to the 29 km / h initially tested.

The problem is that nothing really is being proven that the Mythbusters have done wrong. Actually, they came to the same conclusions, although the square wheels of the latter were more sophisticated (in reality they were square rubber tires, these boys welded metal boxes. And most importantly, they did all their tests with all four wheels square: our friends ended up getting rid of the front. 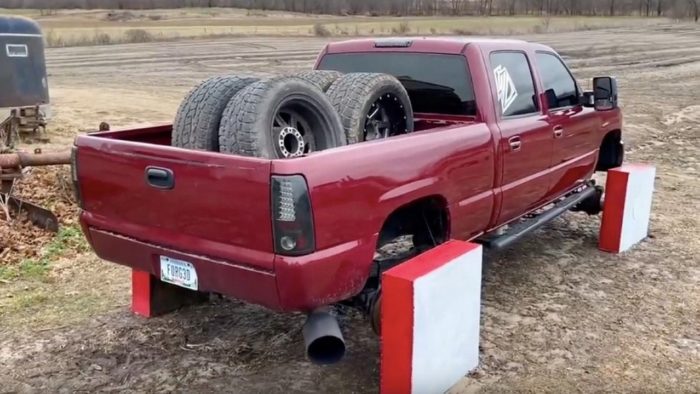 There is a compelling mix of ingenuity, stupidity and humor that is hard to deny. The people of WhistlinDiesel clearly explain what they are doing and let us see it step by step, which makes the short one even educational. The result of driving with square wheels is really not a great idea. In fact, they can quickly destroy what would otherwise be more than decent rolling quality. The only advantage is that they are ideal to fill with dirt everything that is nearby.

Although, let’s not take this video too seriously, it sure was a lot of fun to shoot it. The moral of the story? Well, we could say that we are happy that the wheels have always been round since the beginning of time. At least until the flying car or Star Wars landspeeder become a fairly popular reality on our roads.