The new generation of the Honda Jazz will become one of the most peculiar models on the market when it arrives soon. The reason is that it is one of the few small minivans that remain today and also the enormous number of improvements that it has introduced with respect to its predecessor. We no longer talk about its striking design or its spacious interior, we talk about safety at height thanks to elements such as the front central airbag that debuts in this issue.

It will be the first model of the brand to mount it and also the only one in the segment that will have it. This new airbag is a passive safety element that consists of an air bag that expands in the space between the driver and the passenger in the event of an accident. It is integrated into the upper reinforcement of the driver’s seat and uses three fastening straps for correct guidance around the driver, adopting a curved shape.

It is one of the ten airbags that the new Honda Jazz has in total and is especially effective in side collisions. It is activated in conjunction with the seat belt pretensioners and is also assisted by a higher central armrest. This means that the internal tests of the brands have obtained data such as reducing head injuries by 85% if the blow is from the passenger side and up to 98% if the impact is from the other side. 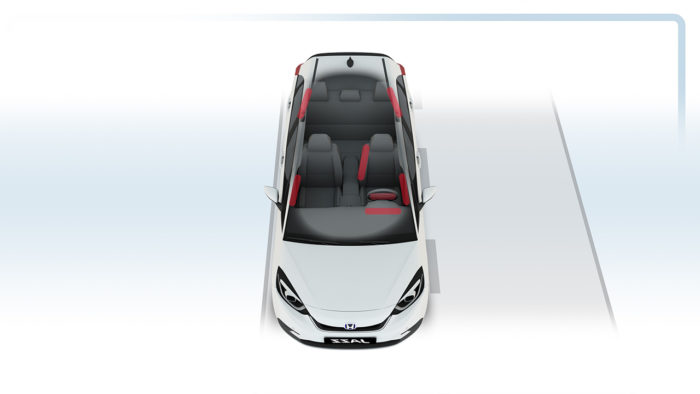 Another highlight in the Honda Jazz is the rear seat i-side airbag, which is deployed in the event of a side collision so that passengers do not hit the doors and the C-pillar. It adds to the Honda ACE body, which stands out for the way in which it reduces the force transmitted to the passenger compartment when hit. On the other hand, this minivan will have all the security systems included in the Honda Sensing. Some appear like automatic braking with cyclist detection, adaptive cruise control, warning of unintended lane change, signal recognition, automatic high beams or the blind spot information system.