After five years in the market, the Jeep Renegade has been updated for 2019. With the new times, more and more manufacturers are choosing to include a hybrid model among their ranks. On this occasion, the last to sign up was the Jeep Renegade Plug-in Hybrid.

The plug-in hybrid version of the most compact vehicle in the US house is equipped with a new turbocharged four-cylinder gasoline engine with a displacement of 1.3 liters. Next to this, an electrical system composed of an electric motor located on the rear axle and a lithium-ion battery. That is, the combustion engine is responsible for driving the front axle while, the electric, the rear.

Thanks to this hybrid system, the Jeep Renegade Plug-in Hybrid can travel up to 50 kilometers without emitting even one gram of emissions through the exhaust outlet, so this plug-in hybrid SUV will have in Europe the zero emission zero. Not having a transmission shaft that carries the power from the front to the rear, the Jeep Renegade Plug-in Hybrid has a system of all-wheel drive named by the brand as 4x4e.

The maximum power of the set is 190 HP, being able to cover the sprint from 0 to 100 km / h in “about seven seconds” and reach a maximum speed of 130 km / h. Still pending homologation, we will have to wait to know the final figures; emissions in mixed cycle will be around 50 g / km 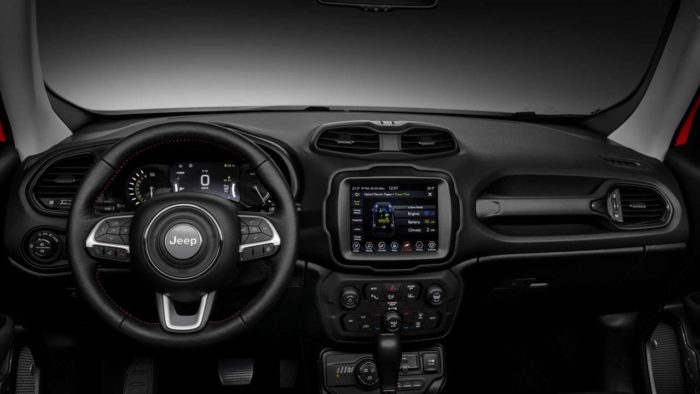 Inside, this Jeep plug-in hybrid version has an instrument panel different from the other versions of gasoline and diesel. The tachometer is kept on the left side and the central display, but the analog speedometer has been replaced in favor of an indicator that shows the state of the battery. Additionally, the multimedia system has a menu to visualize the energy flows and the electricity consumption.