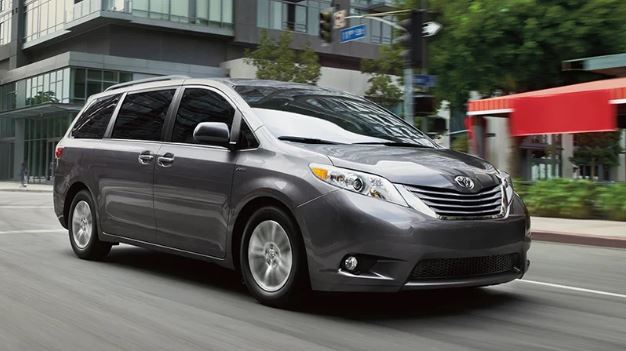 For the first time, a family car crashed on US roads in 1997, and was supposed to replace the first generation of Previa vans. At the moment, the main competitors of the Toyota Sienna 2017 model year are the Honda Odyssey and Dodge Grand Caravan. According to many experts who participated in the tests of the updated model, this car stands out from its competitors, outperforming them in terms of comfort and reliability.

Siena’s updated exterior
External changes of restyled version of the 2017 model year can be literally counted on fingers. When comparing the model with the previous generation, the first thing that catches the eye is the grille. From now on, it is available in different versions depending on the vehicle configuration. Toyota Sienna 2005 – One Of The Best Available Minivans For Today

Lights that painfully resemble those on the Toyota Camry, are the second part of the exterior, which has undergone restyling. Optics acquired LED ribbons for navigation lights. The bumper retains its powerful and monolithic appearance, with improved fog lights recessed around its edges.
The profile of Siena illustrates a rather simple, but at the same time, conservative form. Because of its large skirts, a minivan may seem slightly cumbersome. The upper part of the luggage compartment lid now adorns a small spoiler and radio antenna, and the back of the car, along with updated, trim optics looks very similar to the second-generation Lexus RX.

Interior
The interior delights the owner with high-quality leather trim and soft plastic inserts. The updated central panel with its design resembles the control unit of a spacecraft, and includes a 7-inch touch screen multimedia system. Before the driver’s eyes, there is a color monitor of the onboard system and analogue controls with a white dial.
Among them are the controls of a three-zone climate control, which is smart enough to automatically adjust all three zones at the same time. The steering wheel, leather trimmed, also has a heating system and is equipped with keys to control the JBL audio system. Using Bluetooth wireless technology, the user will be able to make calls and listen to his favorite music from a connected mobile device, and voice recognition technology will facilitate the management of the multimedia system.
Passengers on the second row will be able to enjoy the wide and tall seats with folding armrests. Also, a separate multimedia entertainment system Dual-View Blu-ray Disc will be available to all passengers in the back rows, which includes a 16.4-inch color display, RCA connectors, two 120V electrical sockets, a remote control and wireless headphones. Its unique screen can display one widescreen image or two small from separate sources simultaneously. Toyota will invest 500 million dollars in Uber to focus on the autonomous car

Specifications
Restyled version is built on the same platform as the Toyota Camry. Under the hood, the new 3.5-liter V6 with direct injection of a 296 horsepower engine paired with an 8-speed automatic transmission will work hard. The entire body structure is held at 140 point seams, which provide rigidity, smooth the ride and improve the steering.
Price
The cost of the base model is 27 thousand dollars. For the older model will have to pay at least 40 thousand dollars.