Imagination has no limits. The reuse of old car parts to give life to other models has always been the order of the day as who says, but use them to create a minimoto? We bet that’s something you haven’t seen very often. The Volkspod is a good example of what can be done with a little ingenuity and parts of a classic Volkswagen Beetle. Brent Walter, who describes himself as the “manufacturer and builder of a wide variety of things,” was the author of this minimoto inspired by the Beetle Type 1. Brent took the bulbous fender from each end of the car to bring life to life.

Each piece is equipped with a front and rear headlight of the donor car, so that when two “Volkspod” come together, they can make up almost a complete car. There are not many technical details about this creation, but we know that under the skin there is a custom chassis that houses a 79 cc engine. It probably has the same (or more) power-to-weight ratio as original Volkswagen Beetle. When it was launched in 1936, the “Beetle” had a block of four opposite cylinders (boxer) of 986 cc and 22.5 hp. In 1941 it increased its displacement to 1,131 cc and 31 HP, to 1,600 cc and 50 HP in the 70. 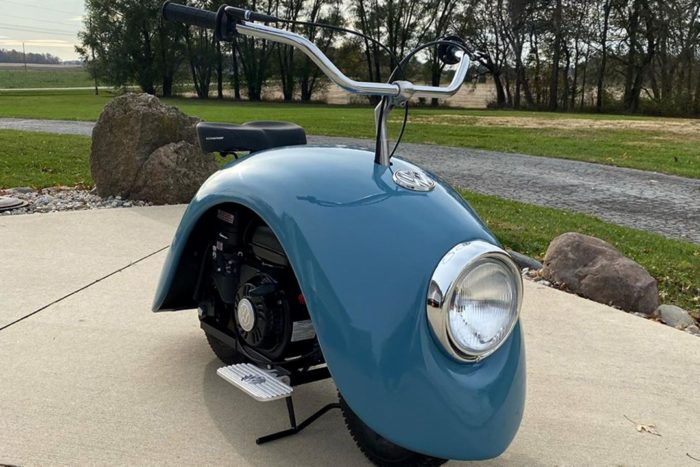 This small scooter that seems out of the 90-s, takes advantage of the simple lines of the fins to integrate a wide handlebar (very similar to that of a bicycle). Similar to the Cyclops or Mike Wazowski from the movie Monsters, S.A. (2001), the “Volkspod” has a very eccentric appeal. At the moment, it is available in the tones of the original Beetle: birch green and pastel blue. Of course, this creation may be the most vintage minimoto you can find.

Being one of the cars that have been in production for the longest time (1936-2003), its rounded shapes and structure have made it a classic that has earned the status of an icon. The last German copy left Wolfsburg on January 19, 1978. Thereafter, they were only manufactured at the Mexican facilities in Puebla. When the New Beetle arrived in 2000, about 22 million had already been manufactured worldwide.