The launch of the Volkswagen ID.3 at the Frankfurt Motor Show has been a turning point for the German brand, with its new generation electric (with the MEB platform), which aims to democratize this type of vehicles, other striking developments have arrived. Because the Volkswagen logo has also been updated, another unequivocal sign that they want to start a new era. The total image change will end at the beginning of next year.

What Volkswagen intends to do is a total rebranding campaign, leaving behind its old image and betting on a more modern and authentic vision. The first has been to simplify the logo, which is now limited to two dimensions and its most essential elements. In this way, better readability is achieved and also that it can be used more easily in the digital world for which they are betting so much today.

If the logo of the brand always occupied a privileged place in its models (usually the grill or bonnet and the center of the gate), now you can take on even more prominence. As we have seen in the Volkswagen ID.3, the emblem is illuminated and linked to the optics, so that it cannot go unnoticed even when night falls. This having the logo illuminated will also be extended to dealers and production plants. 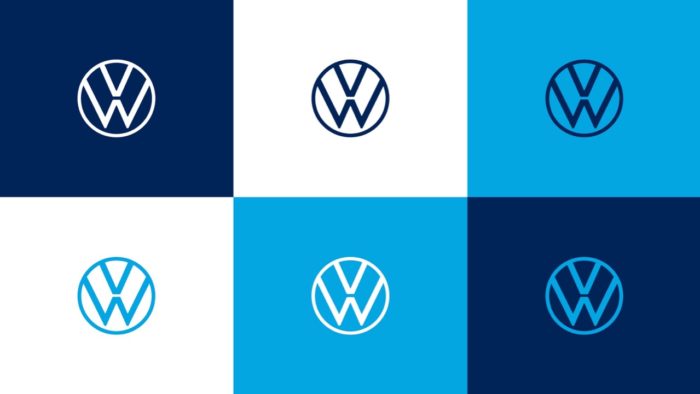 The two-dimensional logo also adds a new shade of blue (previously limited to blue and white), so new possible combinations appear for use. Even working on it will have an acoustic logo something that happens for the first time and that will allow the brand to have a distinctive sound. These changes have been made internally, by a joint Design and Marketing team, and are being implemented in record time. The logo already looks on the tower of the Wolfsburg headquarters and on the front of the ID.3, but by mid-2020 we will be seeing it in all places.