Internal combustion engines have something that makes them especially attractive. Is it because of its apparently simple operating complexity? Or because of the visual wonder of seeing all the pieces work in unison? Regardless of the answer, it’s a nice thing to see. And especially if we talk about large mechanics, such as the W12 Bentley engine.

This is one of the most interesting mechanics for sale today. This twelve-cylinder block is called with a “W” because, instead of having two “V” shaped benches, the cylinders are arranged in two narrow (15º) six-cylinder blocks joined by a crankshaft, forming a larger grape at 72 º. The W12 used in the different models of the house such as the Bentayga, Flying Spur, Continental GT or Mulsanne, is a 6.0-liter biturbo unit. The assembly takes place in a fairly clean and successful room, both by computer brains and by robotic control and human hands. The upper end is particularly robust, with chain-operated cams and cast in aeronautical grade aluminum, just like the rest of the block.

The W12 engine has been defending the most elite versions of the Volkswagen group since 2001, being also the heart of Bentley since it was acquired by the German giant in 1998. It was born with the idea of ​​competing with the competition’s V12 propellers, but with a design very particular that managed to save a significant amount in development costs and space within the span. Its dimensions, practically square, are similar to those of a V8. This engine has evolved over time to adapt to new times, especially in terms of consumption and emissions. Initially designed as an atmospheric engine, it was redesigned shortly after to adopt a pair of turbochargers that remain until today. Currently, all W12 production is carried out at the Bentley factory in Crewe, United Kingdom, and is the only brand of the group that equips them. 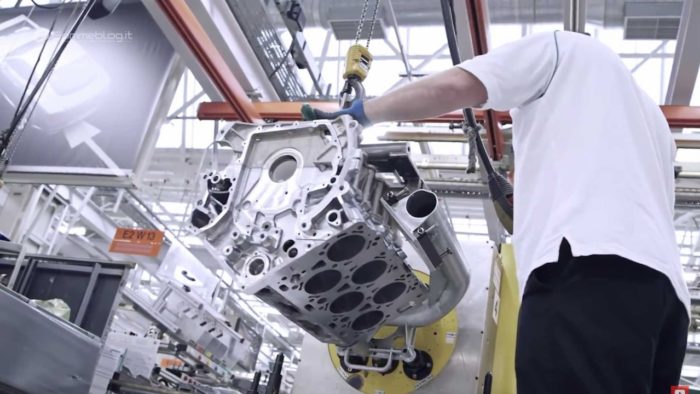 The first stages of engine assembly occur mainly under the responsibility of a human hand, but with the help of specialized machinery that facilitates the work. The block sits on a support, and a technician lowers the crankshaft in place. From there, two employees cooperate to install the 12 pistons. Then, lower the cylinder heads to their place. Once the turbos and wiring are in place, the switchboards wait together for the next step. Next, the engine / gearbox unit arrives to be installed in the front auxiliary frame and along with all its components. When everything is complete and the assembly seems ready, there is one last stop, because Bentley gives the powertrain a check in a bank to do a few tests before installing.