The Jaguar XK 120 has a special meaning for the British firm. It was his first sports car after the Second World War, and the fastest in the world during the 40s until the Mercedes-Benz 300 SL appeared in 1954. Although more than 12,000 copies were produced, both with coupe and roadster bodywork, it is always worth seeing an XK 120 being returned to its former glory, and more if it is a Jaguar Classic work.

The division of the company responsible for rejuvenating the brand’s most long-lived vehicles has recently completed the tailor-made restoration of a Jaguar XK 120 for the male model and enthusiast of the firm, David Gandy. The project needed 2,700 hours of work over 11 months to complete. The result is worthy of a museum, with a high degree of care for the smallest detail.

Its owner wanted the car to be ready to compete in events for automotive industry classics, such as the Jaguar Classic Challenge, so this issue takes as inspiration the specification of the original Jaguar XK 120 Lightweight. The feline house found an adequate base in 1954 in California, USA, sent it to its facilities in Warwickshire and began to work on it with the aim of retaining as many pieces. Jaguar Classic specialists painstakingly reconstructed the 3.4-liter inline six-cylinder engine for five and a half months, and applied a small performance improvement. Instead of developing the original 180 HP, now they are 225 HP. In addition, the chassis has been modified to support higher speeds and the exhaust system has been developed from scratch to accommodate two pipes instead of one. 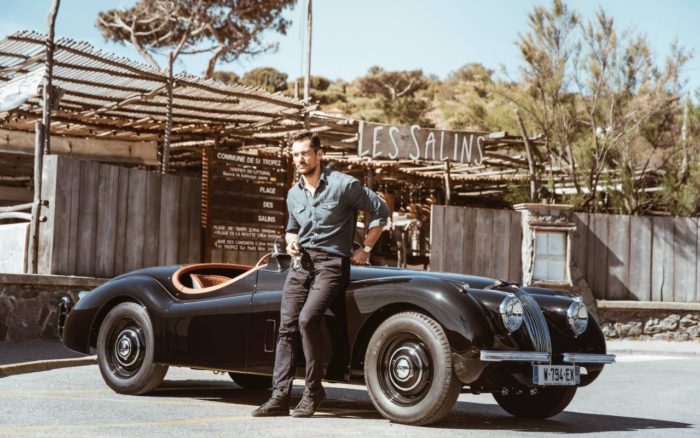 The performance-focused modifications also include a new gearbox suitable for use on shorter circuits and runs between gears, disc brakes with four-piston calipers on the front axle (the rear ones are kept at the factory, restored drums) and fully adjustable shock absorbers. With a weight kept at bay, the driving experience has to be sublime. As for its aesthetics, this Jaguar XK 120 has been dyed in an elegant solid black. It took 13 liters of paint and four layers to achieve such a fascinating finish. The lid of the folding fuel tank is also inspired by the world of racing and the windshield has been replaced by a couple of screens. 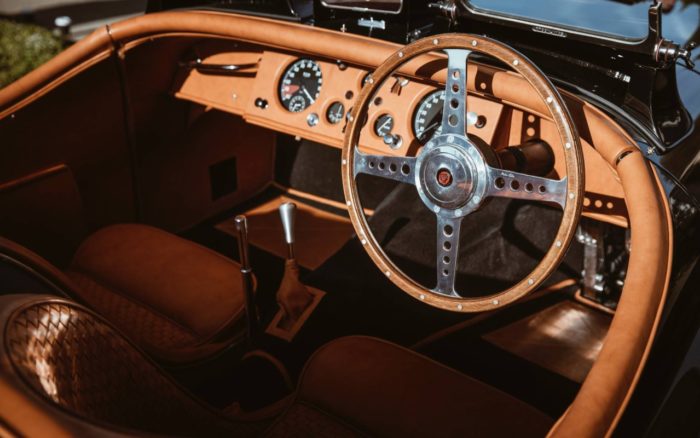 Inside the welcome is given by an aged brown leather interior and custom-designed seats with aluminum backrests instead of the original fabric. The steering wheel is also a bit smaller – 381 mm – and the battery has been relocated (before the driver’s seat) to free some space from its owner, who is 1.88 m tall.