Live sales of new items in the home market will begin in December 2020, now dealers are taking orders. Prices for the “refreshed” crossover are already known.

The British company began selling its first crossover, the F-Pace, in the spring of 2016. The model is produced at the British JLR plant in Solihull. The best SUV for this was 2017: then on the European market, dealers managed to sell 30,920 copies, then sales began to decline. So, at the end of last year, customers in the Old World bought only 18,884 cars, which is almost 20% less than in 2018. Now it’s time for the planned restyling: today Jaguar has declassified the “refreshed” cross.

The F-Pace’s exterior remained largely intact during the update. The basic versions now have LED head optics, a pair of double J-shaped stripes appeared in the headlights (they can be matrix for an additional charge). The radiator grille of the “refreshed” crossover received a different pattern and became a little larger, there is no longer a bar between it and the edge of the hood. Both bumpers have changed, the design of alloy wheels, the shape of the exhaust pipes; the rear lights now have the same styling as the electric sibling I-Pace.

But the interior of the restyled F-Pace has changed much more noticeably. The crossover received a new generation multimedia system with a touch screen enlarged to 11.4 inches in the center of the front panel (in the pre-reform version – 10 inches), two SIM-cards and the ability to update software “over the air”. “Tidy” is still digital, the diagonal remains the same (12.3 inches), now it has a projection screen. On the center console there is a touchscreen with rotating handles, and on the central tunnel the place of the washer was taken by the joystick to control the automatic transmission. The five Jaguar Land Rover models that will arrive from 2020 to 2022

In the first row, there are now new seats with a massage function, the door panels have also changed: the window regulator keys have disappeared from the window sills and are now on the armrests. The multifunction steering wheel now has touch-sensitive buttons. At the base of the center console of the updated British brand crossover there is a platform for wireless charging of smartphones. The decoration uses natural leather and wood, as well as aluminum inserts. 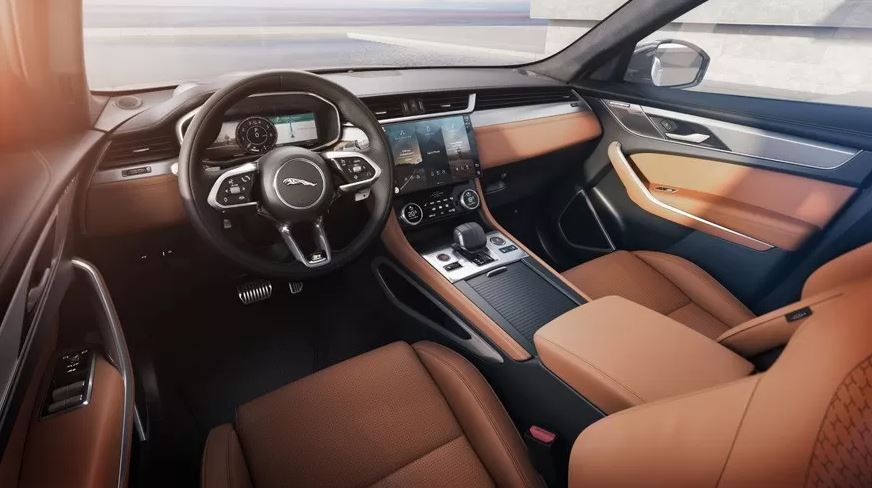 In the course of restyling, the Jaguar F-Pace lost its manual transmission and rear-wheel drive modifications. Now even the initial versions of the model have four-wheel drive and an eight-speed “automatic”. The engine line was shaken up: the V6 engines left it, only the engines of the Ingenium family remained, although there were fewer of them. So, there is only one petrol turbo 4, 250-strong (the predecessor has a 300-strong version in the range). In addition, previously the 2.0-liter four-cylinder turbodiesel was offered in three boost options – 163, 180 and 240 hp, and now only in two (output – 163 or 204 hp). In addition, the list was supplemented by in-line six-cylinder 3.0-liter engines: the power of gasoline is 340 and 400 hp, and the diesel – 300 hp. (these motors are installed on Land Rover and Range Rover models).

Crossovers aimed at the European market will have “mild hybrid” versions – all diesels, as well as a 3.0-liter petrol engine, will work in tandem with 48-volt starter-generators. In addition, the updated F-Pace lineup now features a full-fledged plug-in hybrid with the P400e prefix to the name. Its installation is based on a 2.0-liter gasoline “turbo four” and a 143-horsepower electric motor. The total system power is 404 hp. (torque – 640 Nm). This setup was recently fitted to a Land Rover Defender. The capacity of the Jaguar cross-country lithium-ion battery is 17.1 kWh, the power reserve when driving purely on electric traction is enough for 53 km.

The new product will arrive at British dealers in December 2020, while they are taking orders. The starting price tag of the “refreshed” crossover is 40,860 pounds sterling. The plug-in hybrid, which will hit the market in spring 2021, will ask for £ 64,490